WHY DID WE CHOOSE THIS TOPIC?

As a group we chose to do Marvel because of the different aspects it has. The Marvel world is such a broad place with different connections to things that you would never guess and it has gained so much popularity within the last decade.   Some of us knew a good bit about Marvel, and some of us did not which gave us a good opportunity to learn more. Our goal was to go deeper and find out how Marvel connects to real-life events. We also wanted to incorporate peoples' opinions and see how much knowledge they had concerning our topic. We found a great deal of information, and we would like to share it. We hope you enjoy! 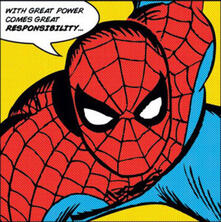 In 1939, Martin Goodman founded Timely Comics,the publishing company that would become Marvel Entertainment of today. Timely Comics issued many successful titles. Artists and writers Joe Simon and Jack Kirby would be first to introduce Captain America in 1941. The success of the character was largely due to American sentiments regarding WWII. The Post-War era was difficult on the publisher, the popularity of comic book superheroes fell. Timely Comics was re-branded as Atlas Comics as it struggled through the 1950s, refocusing its material on more popular themes like Westerns. Marvel Comics emerged as a response to the growing popularity of Detective Comics issues. In the late 1950s and early 1960s, DC comics was seeing its superhero genres regain traction among the public. Jumping on the bandwagon, Atlas comics once again re-branded under the new name "Marvel Comics."

In 1961, Steve Ditko, Stan Lee, and Jack Kirby released their first issue of The Fantastic Four. This re-imagined superhero series was unique in that the writers put much more emphasis into the characterization of their heroes than previously comics. Marvel gained its reputation by focusing on the personal relationships between characters and the environments in which they found themselves. In comparison to DC comics heroes, Marvel's heroes were presented as more human, and less super. No better example of this unique characterization exists than that of Marvel's most successful superhero, "The Amazing Spider-Man!" Peter Parker (aka: Spider-Man) is a typical teenage American. Aside from the villains and monsters, Peter finds himself also wrestling with the struggles of young love or being a poor student. These real-life issues made the character very relatable to young adults. This strategy would prove to be the success of the Marvel brand. 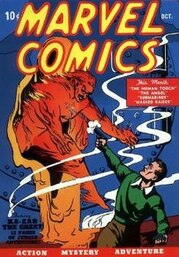 By holding a mirror up to society and pitting its heroes against issues caused by current events, the writers of Marvel Comics have done more than create compelling characters, they have created an evolutionary record of American society. The continuation of this tradition can be seen within Marvel Studios new endeavors to create a new cinematic universe for its heroes to explore. The transition from illustrations on paper to live-action films has served to greater strengthen the personal connections fans have developed with their favorite characters. The success of these films has transformed this niche of nerd culture into a world-wide, pop culture phenomenon and it is all due the genius writing and characterization that has made these iconic characters so important in our understanding of American society.
​
How Marvel has adapted their characters to changing American political and social climates? 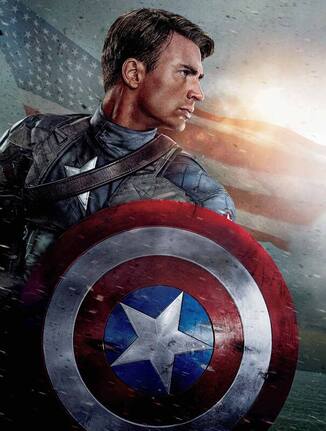 ​From the beginning of World War I, war propaganda was used to shape international opinions. War propaganda was a type of public relations whose sole purpose was to manipulate society's feelings towards war. Sources such as newspapers, books, and cartoons were produced in the attempt to affect the influences of neutral and enemy countries. When propaganda was used by the government, they had desires to gain support from citizens in order to influence their emotions, attitudes, and behaviors to help benefit the nation.

One of the creators of Captain America, Joe Simon, specifically attributes the idea to him being the polar opposite to Adolf Hitler. The creation of Captain America in the middle of WWI certainly backs this up. In an interview with MTV in 2011, Simon explains his view that Captain America is meant to be an icon for how Americans should act in the face of situations like the rise of Adolf Hitler.  He states that "too many heroes have ambiguous ideals and motives, and it takes a hero like Cap to show us the way things out to be." 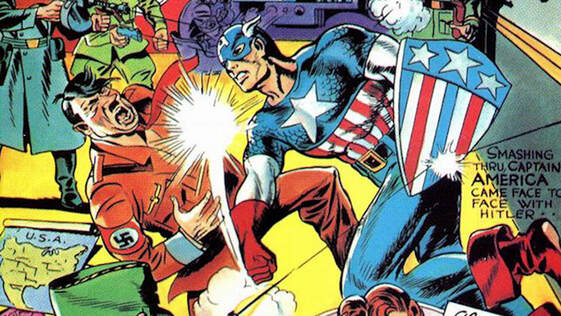 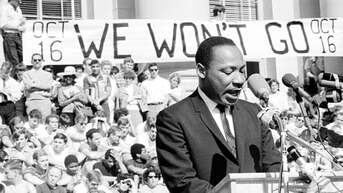 The Civil Rights movements took place beginning in the 1940's and ending the late 1960's. This movement was organization due to the struggle of African Americans who wanted to end racial discrimination and obtain equal rights by law. They had desires to have equivalent rights as whites, which included equal opportunity of employment, housing, and the right to a fair education. The movement included the ability to gain rights that included the right to vote and the right to have equal access of public facilities.

The first appearance of Black Panther had him take on the Fantastic Four in their own comic series and nearly defeat all four of them. With the Black Panthers organization coming shortly after the announcement of the Black Panther character, Marvel Comics changed the name temporarily of the character to Black Leopard. 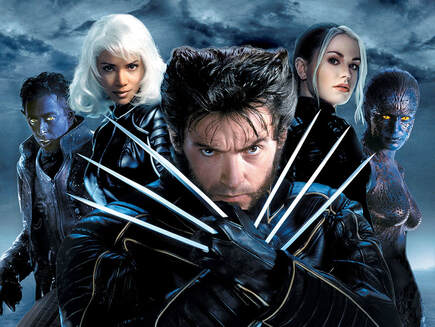 In an interview with Rolling Stone in 2014, Stan Lee discussed
the creation of the X- Men. One of the questions that was
asked was about the similarities between Martin Luther King,  Jr. and Malcolm X and the comic characters Professor X and Magneto respectively . Stan Lee's response indicated that it
was perhaps a projection of his feelings but not an intentional one. Despite that however, Lee did go on to state that the
​entire idea behind the X-Men and their struggles to achieve equality between mutants and normal people as coming from the civil rights movement itself.
From the 1960's to the 1980's, a social movement known as the sexual revolution challenged traditional codes of behavior that were related to sexuality and interpersonal relationships. Initially, this movement began in the United States and spread worldwide. Due to this movement, there was an increased acceptance of sex outside of marriage. Other sexual behaviors were embraced which broke the barriers of a traditional heterosexual relationship or marriage. 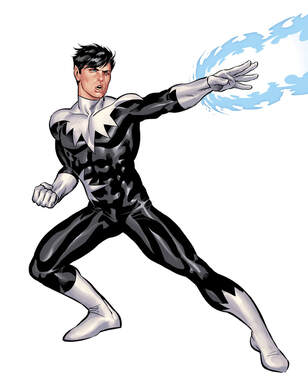 The character NorthStar was created in 1979 in the midst of the Sexual Revolution but did not come out as openly gay until a couple of years after its end. Coming out as gay in 1992, one of the first things that occurred the same year was NorthStar's decision to adopt a child who was born with AIDs and died a few weeks after. Coming out to the public as gay in an attempt to bring attention to HIV and preventing it, NorthStar was the first openly gay character from the Marvel comics and him coming out as gay so close to the sexual revolution is a good indication on the effect of the time on the character. 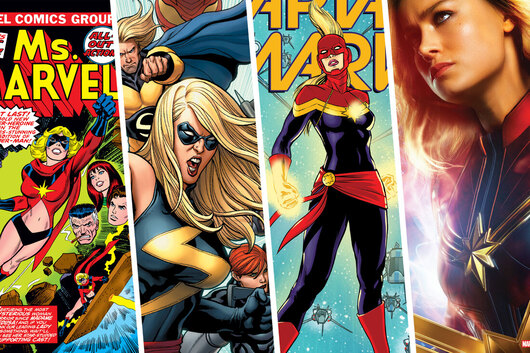 ​The female-led, Carol Danvers version of the comic, first called “Ms. Marvel”, was not introduced until the late 1970s around the time the feminist movement started to become a big deal. She came into the comics as the girlfriend of Captain Marvel (deceased). As the feminist movement grew, so too did Ms. Marvel's role as a character. Her history was retroactively changed so that after an accidental encounter with a Kree machine, turning her into a human-Kree hybrid. Ms. Marvel emerged with powers including superhuman strength, flight and longevity. Carol Danvers debuted in her own series as the superhero Ms. Marvel in 1977. The hero was meant to be explicitly feminist. It wasn’t until the 2000s, however, that she began playing significant roles in major story lines like the 2006-2007 “Civil War” between Captain America and Iron Man and leading the Mighty Avengers in 2007. “Captain Marvel” was announced as Marvel’s first, female-led superhero film. Ms. Marvel is credited to be one of the most powerful female heroes in the MCU.

The Cold War as known as a decade-long struggle that happened after World War II and affected global supremacy that scarred the capitalist United States versus the communist Soviet Union. The Cold War was executed on the means of political, economic, and propaganda fronts. Due to these wages, there was very little use of weapons on the battlefield during the Cold War.
In the very first issue of the Fantastic Four comics, the heroes are granted their powers by coming into contact with cosmic energy that they encountered while testing a space rocket. In the same year that this comic was issued, the Russians had already flown a man into orbit. The entire purpose of the four going into space was to fly a much better spaced rocket into space than the Russians had. One of the characters, Sue Storm even states "We've got to take that chance... unless we want the commies to beat us." One of the most popular super hero groups in comics, the Fantastic Four's whole origin revolves around the Space race. 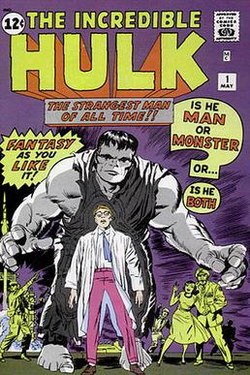 Debuting in the midst of the Cold War, the Incredible Hulk's power to become a huge rage monster is the result of infusion with gamma radiation. During the Cold War, radiation was a worry for many Americans due to the stockpiling of Nuclear Warheads by America and Russia. With a character like this coming out to the public during a period dominated by the worries of radiation, the inspirations for this character are obviously a product of the time. To further add to this point, the event that granted Bruce Banner the ability to change into the Hulk was an accident involving testing for a gamma bomb. By looking at the treatment of radiation in the Hulk's comics, the worries about mutation via radiation and the effects that it may have are displayed throughout the comics.